Coding for Kano Wand outside the app

This article is for those who receive a Kano Harry Potter Coding Wand, perhaps as a gift. You try the App that comes with it and then think “This is an interesting piece of hardware. What else can I do with it?”

Well I hope so. That is why I bought one as a gift - and I’m not the first to see its potential as a remote control device.

This is my record of what I discovered before it went on its way to a new owner.

What is this thing?

It can be a magic wand

or a neat little bluetooth device 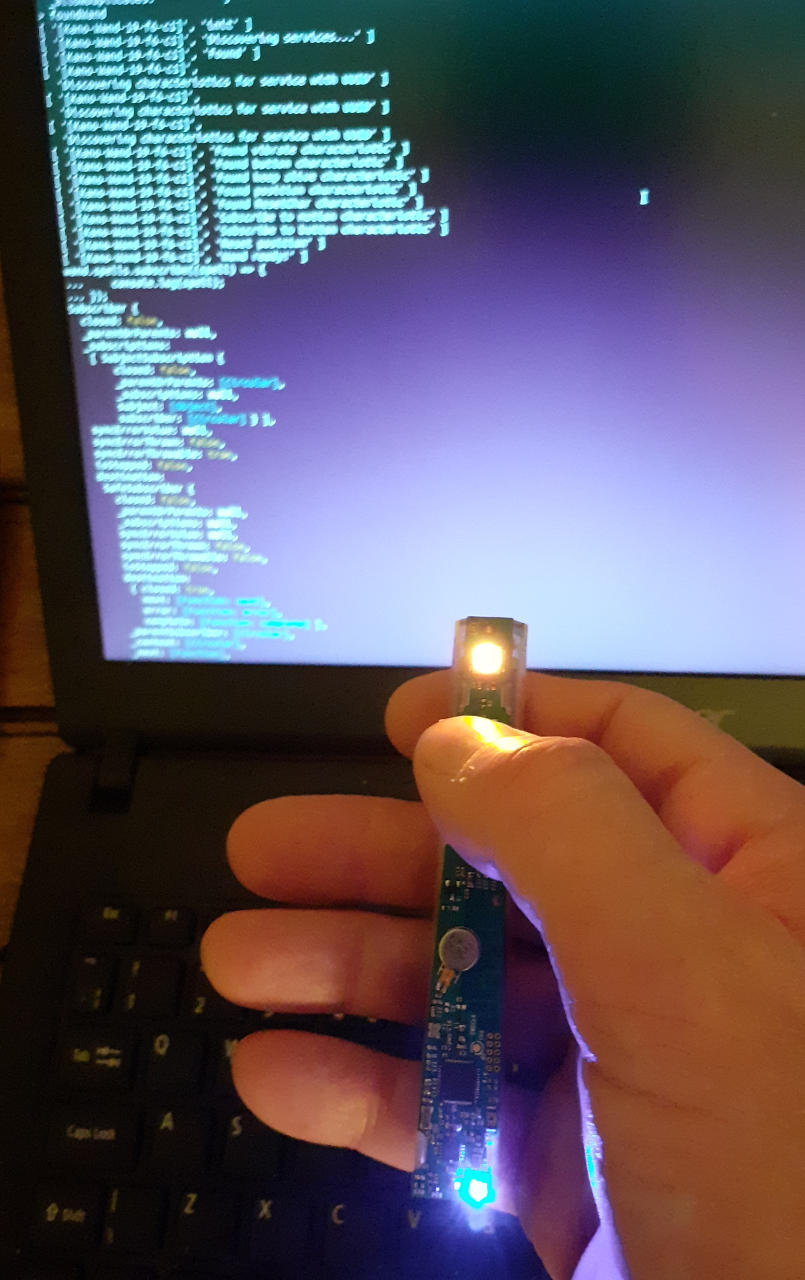 Can I talk to it from my Linux computer?

I was using Ubuntu Bionic. Package names and filenames may differ on other systems or versions.

You will need a Bluetooth host adapter which supports Bluetooth Low Energy, some software which may not already be installed, and to grant some extra privileges to the hcitool program.

These instructions are from Stack Exchange

If your device can’t do Bluetooth Low Energy, you may see Set scan parameters failed: Input/output error. If you have multiple Bluetooth host devices you can use a different one by name. hci0 is the default and hcitool dev should list what you have available. I didn’t do this and haven’t shown how to do it when using the other code below.

If it is working, you will see LE Scan .... Wake the wand and it should show itself like Kano-Wand-xx-yy-zz. OK, your hardware is working! Press ctrl-C to stop.

Can I talk to it from my MacOS X laptop?

Probably, if it’s not very old. I haven’t looked up the equivalent of hcitool lescan.

Other tools that will be needed

We’re going to need some compilers. We will also need a distributed version control system called Git which will be useful for fetching other people’s software.

Under Ubuntu Linux, in addition to the Bluetooth-related tools above, they can be fetched with sudo aptitude install git build-essential . In older Ubuntu, the git package was known as git-core. build-essential brings in a commonly useful assortment of compilers and libraries.

On a Mac, the XCode tools can be installed from the Apple Store and Git is included. Exactly how this is done may differ between versions of MacOS, but Homebrew helped me to get it right.

Can I talk to the Wand in Javascript?

Yes! But the instructions are a little different between Mac and Linux, because the noble package which provides access to Bluetooth LE has a Mac-specific fork called noble-mac.

The kano-wand-nodejs project I used was started by megabytemb a year ago, and other people have extended or modified it. This is how it looks in Github’s “project fork” view.

On Mac, the default master branch of megabytemb’s project worked for me.

On Ubuntu Linux, the grpc branch of GageAmes’ version worked for me.

Either way, we need NodeJS to run the Javascript, which includes the Node Package Manager to fetch more code libraries.

We can install everything, fetch the project and run the example with a few lines.

To install NodeJS I start with Homebrew so I didn’t need any administrator privileges.

Once NPM is working and the correct kano-wand-nodejs is downloaded, the process is the same.

Enter the downloaded project directory. Tell npm to install everything listed in the package.json and package-lock.json files. Run the example!

It should wait until the Wand is woken up, then

Now hold the button down and draw a spell

(That’s the only spell I can get right reliably.)

Can I talk to the Wand in Python?

Maybe, but on Ubuntu Bionic I ran into problems and found easier success in Javascript. I will try again if I have time, but for now this section is incomplete.

Other problems seen on the way?